Why “flourishing” is the buzz-word right now…

Why “flourishing” is the buzz-word right now…

In positive psychology, to flourish is “to live within an optimal range of human functioning, one that connotes goodness, generativity, growth, and resilience”.

Flourishing is the opposite of both pathology and languishing, which are described as living a life that feels both hollow and empty (Wikipedia).

The Institute of Well-Being at Cambridge University defines flourishing as…the experience of life going well. It is a combination of feeling good and functioning effectively. Flourishing is synonymous with a high level of mental well-being, and it epitomises mental health (Huppert, 2009a,b; Keyes, 2002; Ryff & Singer, 1998).

Here at PI (The Positivity Institute), we help people, schools and businesses to “flourish” and be the best they can be. And whilst we acknowledge, there is a need to appropriately provide “clinical treatment” for mental disorders, research has shown that treatment alone isn’t sufficient to shift the population bell-curve of mental health i.e., it wont’ help move more of the general population towards flourishing. 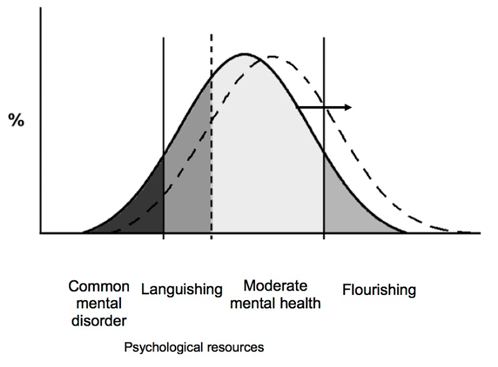 What we need is proactive, non-stigmatised positive psychology programs in our schools, workplaces and our communities to move the bell curve to the right!

The Benefits of Flourishing?

So flourishing is not just about feeling good, it’s about functioning well!

However, the prevalence of flourishing is barely 20% in the adult population, highlighting the need for proactive positive psychology programs that complement ongoing efforts to prevent and treat mental illness.

The Flourishing Scale below was developed by Robert Biswas-Diener and Ed Diener, pioneers in the study of happiness and well-being.

The scale is also not meant to diagnose depression, anxiety or any other disorder. So if your scores are low across many of the questions that may indicate distress or disorder and we’d highly recommend that you consult with your General Practitioner as soon as possible. You can also undertake a depression self-assessment at the Black Dog Institute website – http://www.blackdoginstitute.org.au/public/depression/self-test.cfm.

We also urgently need to lose the stigma of seeking help. Here in Australia, we’re a long way from New York where people brag about having a therapist! Most people wait too long to get assistance. And we know it’s far easier to proactively boost our well-being when we’re well but much harder to boost well-being, if you’re depressed or anxious.

The good news is though – there are many evidence-based interventions that can successfully treat psychological distress and disorder – so don’t put it off any longer! Many people often falsely think that seeing a “shrink” means lying on a couch for years unearthing and sharing deep, dark secrets from your childhood. Whilst that may be true in some instances for severe, long term, intractable psychiatric disorders, for most people it’s 6-12 sessions of brief therapy. Many of my past clients have said that having therapy has “changed my life” and “why on earth didn’t I do this earlier?”. You can also use the free “Find a Psychologist” service offered by the Australian Psychological Society (http://www.psychology.org.au/FindaPsychologist/Default.aspx)

Below are 8 statements with which you may agree or disagree. Using the 1–7 scale below, indicate your agreement with each item by indicating that response for each statement.

4 – Neither agree nor disagree

____ I lead a purposeful and meaningful life

____ My social relationships are supportive and rewarding

____ I am engaged and interested in my daily activities

____ I am optimistic about my future

Scoring: Add the responses, varying from 1 to 7, for all eight items. The possible range of scores is from 8 (lowest possible) to 56 (highest PWB possible). A high score represents a person with many psychological resources and strengths.

The Foundations of Flourishing

Whilst psychology as a scientific field of study has helped us to understand how to reduce mental illness, it’s not been until the field of Positive Psychology emerged that we have learned what it takes to flourish.

Professor Martin Seligman, known as the Founding Father of Positive Psychology, has outlined his own model of well-being consisting of the five foundations of flourishing i.e., PERMA (Positive Emotions, Engagement, Positive Relationships, Meaning and Accomplishment). Flourishers rate highly on each of these five foundations. 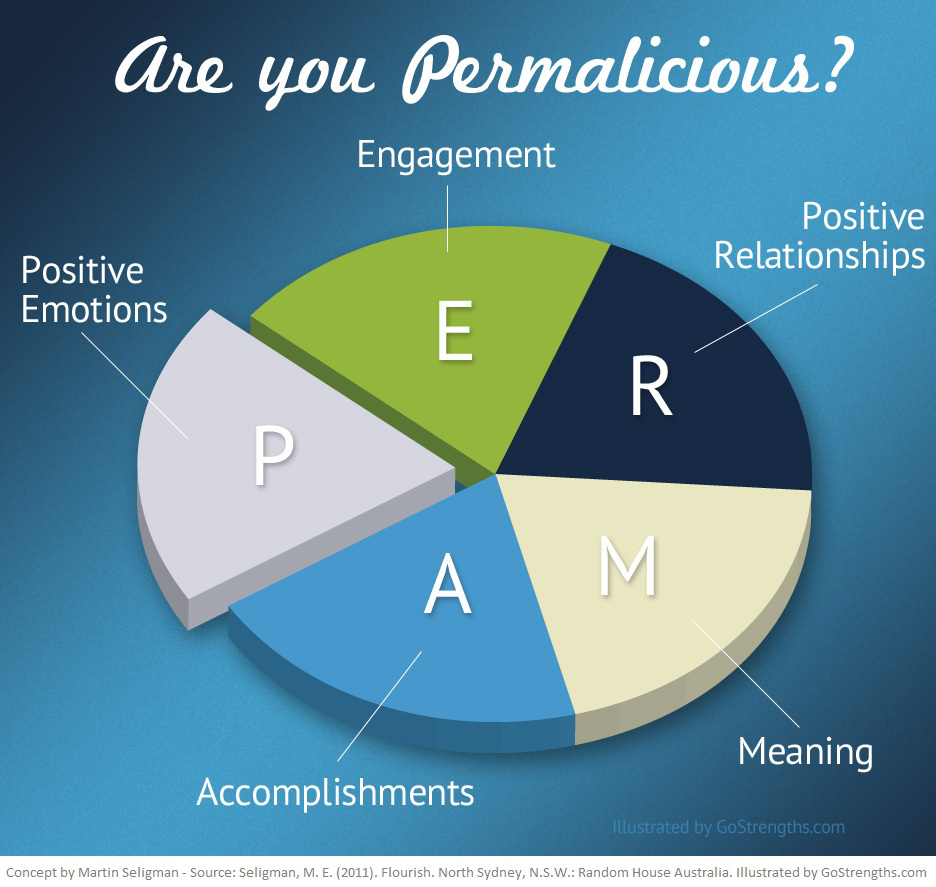 Is your school or workplace Flourishing?

There are many ways we can determine if a school or workplace is flourishing, and historically through the use of a culture, climate or engagement survey. Another simple way is to notice how you “feel” when you enter the organisation. Who is the first person you meet, are they are a “positive energiser”? Does the environment “prime” for well-being? Is there an abundance of positive emotions over negative ones; do people know and use their strengths on a daily basis? Are their positive social networks that extend into the community? Do people feel a sense of meaning and purpose in the work they do and see their role’s connection to the values, vision and mission of the organisation?

Whilst the application of the science of well-being is relatively new to schools and workplaces, there’s some great stuff happening. Check out the Positive Education Schools Association – http://www.pesa.edu.au and you could spend all day on the website of the Centre for Positive Organizations at the Ross School of Business, University of Michigan, the leader in the scientific study of flourishing organisations – http://positiveorgs.bus.umich.edu/.

Want to learn more about Flourishing?

• Register today for one (or both) of our “Flourishing Retreats” being held in July and November at the stunning Centennial Park, Sydney – http://www.williamdejean.com/index.php/store1/183-flourishing-in-2017

• Contact us for more information on our “Positive Psychology Coaching” packages – info@thepositivityinstitute.com.au