Our Positive Coaching Solutions help individuals, groups and teams to flourish. Our Positive Coaching approach is underpinned by the science of Positive Psychology Coaching and supports individuals to create meaningful and sustainable change. We utilise practical tools and techniques for transformation based on scientifically proven strategies for enhanced wellbeing, resilience and performance.

Mental health conditions present substantial costs to organisations. More and more organisations are looking to adopt a proactive approach to mental health and wellbeing rather than relying solely on an Employee Assistance Program (EAP) after issues arise.

The Global Council for Happiness and Wellbeing (2019 Policy report) found that there is a compelling business case for promoting worker wellbeing.

Furthermore, in a survey conducted by PwC in 2014 it was found that organisations that implement effective actions to create a mentally healthy workplace, on average, can expect a positive return on investment (ROI) of 2.3. That is, for every dollar spent on successfully implementing an appropriate action, there is on average $2.30 in benefits to be gained by the organisation.

In the same report, Leadership Coaching was identified as one of seven key evidence-based mental health actions available to organisations for implementation. The study identified leadership coaching being provided to approximately only 5% of the workforce. Hence there is a large opportunity to proactively address mental health issues in the workplace via coaching.

More recently, in a 2018 survey about wellbeing coaching, Michelle McQuaid found that a small percentage of workplaces were providing wellbeing coaching, and where they did, workers were more likely to be consistently thriving workers. Further, research has found that companies that provide mental health support (EAP) AND wellbeing development improved in both wellbeing and performance.

We also recognise that evidence-based coaching is an integral part of creating a positive workplace culture, improving organisational performance and transferring knowledge gained from training into sustainable change.  Our Positive Coaching Solutions include Leadership Coaching and Wellbeing Coaching services.  A common approach to Leadership Coaching has been focused on enhanced performance.  Our approach has a focus on supporting leader performance and wellbeing eg third generation coaching.  In addition, our expertise is in developmental or what’s often referred to as transformational coaching. This type of coaching takes a broader strategic approach, often dealing with issues relating to personal and professional growth. This enables coachees to create a fundamental shift in their capacity to change their thinking, feeling and behaviour and create greater levels of systemic awareness in that systemic change can also be affected positively through the “coaching ripple effect” (O’Connor & Cavanagh, 2013).

Our Executive & Leadership Coaching is designed for leaders who desire a dynamic, challenging and personally accountable process that will help them get the most out of their role, increase their work and life satisfaction, and leave a positive legacy for those who follow.

Executive and Leadership Coaching not only enhances wellbeing, character and performance, it builds resilience and mental toughness that fortifies leaders against stress and burnout, enhancing a leader’s ability to meet current and future challenges at work. Indeed, coaching has been found to increase resilience and reduce depression in the workplace with executives (Grant et al., 2009).

Dr Suzy Green also retains a small number of C-Suite clients. If you’d like to work with Suzy, contact us via email.

Our Workplace Wellbeing Coaching is designed for staff to proactively elevate workplace wellbeing, resilience and performance. Our virtual coaching solutions are focused on the proactive enhancement of individual wellbeing and can be made available to employees at any level in the organisation.

For more detail on our wellbeing coaching solutions, click here. 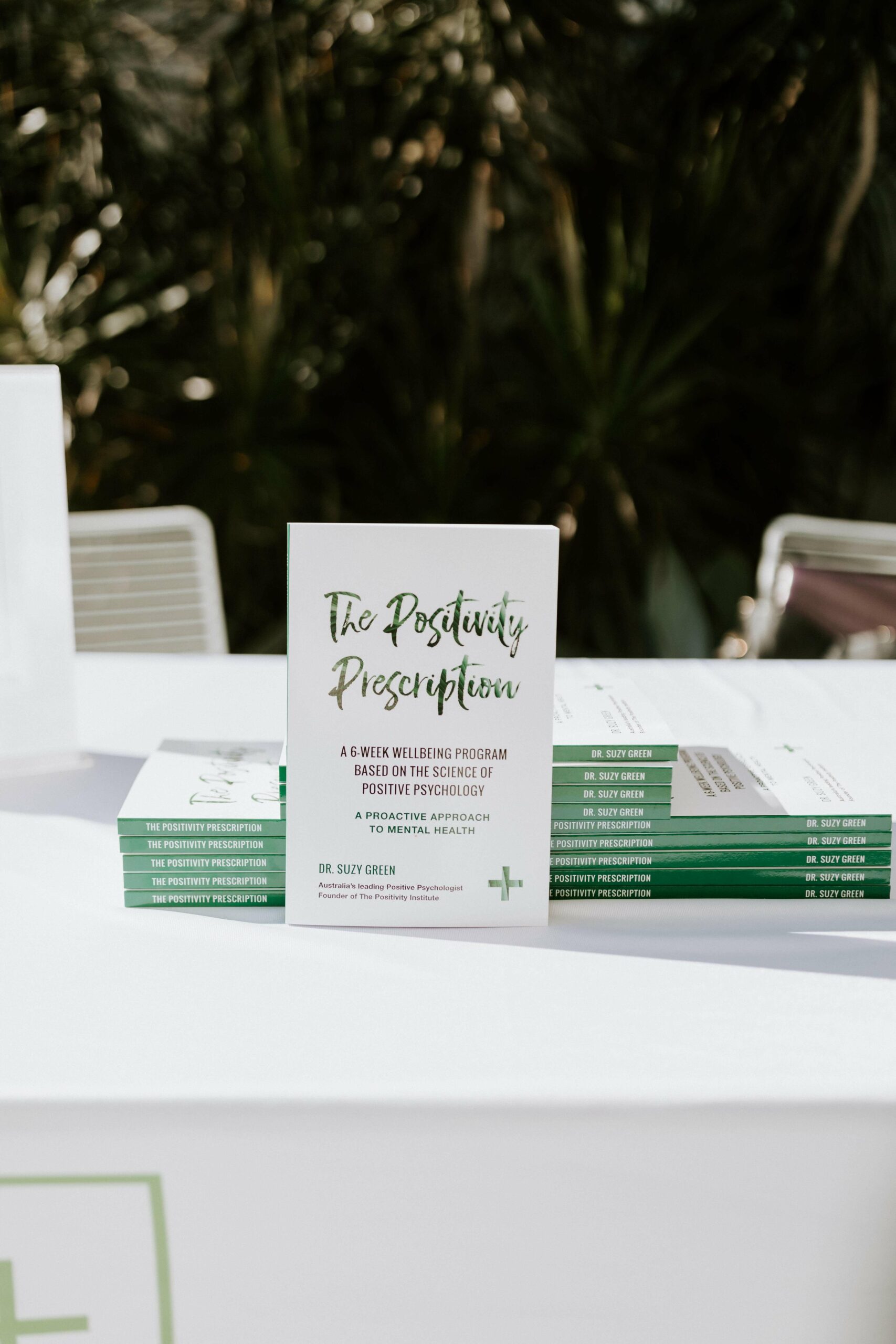 Get your copy of The Positivity Prescription

Life’s too short to languish!

Over the last 20 years, Dr Suzy Green has studied what it takes to be mentally and emotionally well. Having shared her knowledge with thousands of clients in Australia and globally, Dr Suzy Green now takes this life-changing information to a broader audience with The Positivity Prescription.

In her latest book, Dr Suzy Green distils the key principles behind Positive Psychology and outlines a six-week program that will allow you to create transformational and sustainable change to become your best possible self. While an abundance of books on happiness exist, The Positivity Prescription sorts the wheat from the chaff and includes 20 evidence-based Positivity Practices that will boost your mood and help you live your best life.

1. The “Wellbeing-Engagement Framework” (Grant & Spence, 2009), where a focus on elevated levels of wellbeing and engagement at work result in employees who flourish and perform better. 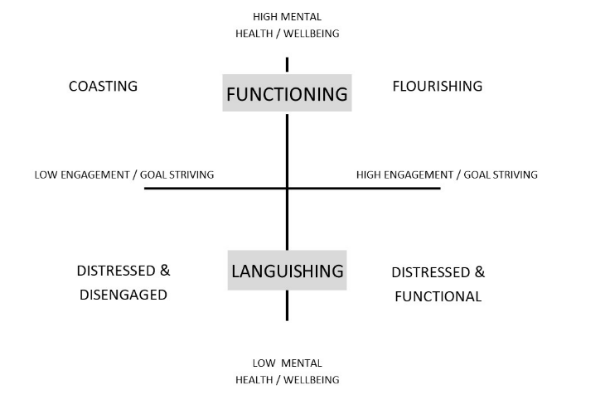 2. The 6M model of wellbeing and peak performance (Dr Suzy Green, 2019) is based on Positive Psychology – the science of optimal human functioning. These six key psychological strategies have been identified in research and practice to make a significant impact on people’s wellbeing, purpose, positivity, performance and resilience. The various tools and techniques that make up this model have proved to be successful in bringing about individual transformation, positive cultural change and contributing to organisational effectiveness. 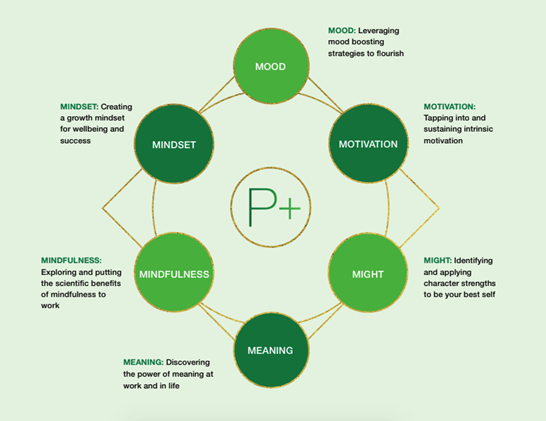 How is Wellbeing Coaching different from traditional executive coaching?

Wellbeing coaching has a primary focus on enhancing wellbeing. It does not have specific workplace performance outcomes on input from leadership. It may be provided to a member of staff or teams as an employee benefit or as a proactive approach to enhance mental health and wellbeing.

How effective is coaching?

Coaching can facilitate goal attainment, enhance psychological and subjective well-being and resilience, while reducing depression, stress or anxiety. There are also two RCT studies of workplace coaching, with one finding evidence for the effectiveness of coaching on health, life satisfaction, burnout and psychological well-being. There is also some evidence that coaching and mentoring are associated with higher levels of job satisfaction and commitment to the organisation and several small scale pre-post coaching comparisons (without random allocation) showing that coaching may enhance well-being.

What is Positive Psychology Coaching?

It is evidence-based coaching practice informed by the theories and research of positive psychology for the enhancement of resilience, achievement and well-being (Green & Palmer, 2019).

Coaching is a research-informed, strengths-based, solution-focused, conversation enabling the striving towards personally meaningful goals, and which enhances personal resilience and wellbeing.

Virtual coaching provides all the benefits of traditional face-to-face coaching, but uses today’s technology to make coaching more convenient and cost effective for you. Either by phone or using the video function of your phone, tablet or computer, you and your coach can build rapport and have collaborative coaching conversations, as if in the same room. It’s super- efficient with zero wasted travelling time or cost, and can be done at a time to suit you, no matter where you are in the world.

All PI coaches hold post-graduate degrees and are highly experienced in the science of Coaching Psychology and Positive Psychology.

Do I need coaching or counselling?

To find out what Coaching Approach is best for you or your organisation press the button below to book a 15 minute complimentary coaching conversation:

We don’t provide therapy or counselling, but do provide proactive services to help you create a flourishing life.

To locate a psychologist near you, please use this link to Find a Psychologist within Australia.

“Dr Suzy Green’s personal passion for, and her deep understanding of the science and practice of coaching psychology and positive psychology underpin her global reputation as a key leader in the coaching and positive psychology profession. This book distils over 25 years of work and gives us a “prescription” for a life well lived. It’s evidence-based, it’s practical, it’s easy to apply to your life – and it works. There’s no BS here!”

“Suzy’s wisdom is like chicken soup for the soul. These pages are filled with inspiration, knowledge and guidance to live a richer, more joyful and meaningful life.”

“The Positivity Prescription is written by one of the most experienced and knowledgeable experts in clinical, coaching, organisation, and positive psychology. It’s a gem of 20 pertinent and practical, science based activities to proactively manage complete mental health – a readable and accessible book for everyone including friends and family.”